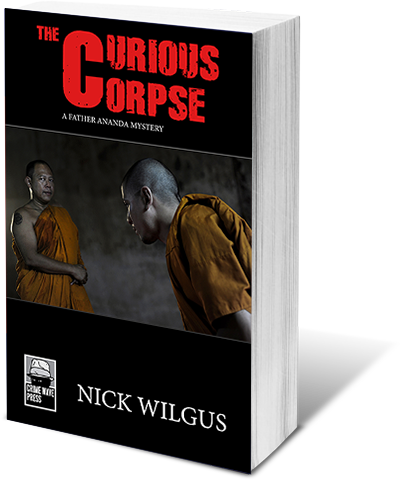 When the body of a foreign woman is discovered at his busy temple in Bangkok during a monsoon downpour, Father Ananda finds himself at the center of a dangerous investigation.Who is this woman, and why does she clutch a Koran in her cold, lifeless hands? Was she, as Pol. Lt. Somchai suspects, a Russian prostitute? Or is there more to the story? And why was she murdered on the grounds of a temple?

As Father Ananda ponders these questions on his alms round the following morning, he is attacked by two Russian men demanding he turn over “the camera.” No camera was found on the body of the murder victim, but Ananda realizes it must contain photographs on the memory card that someone—either in the Russian mafia or the Russian Embassy—desperately wants to keep secret.But, pictures of what? Wrongdoing by the Russian attache´? Or something a bit closer to home for Ananda and his fellow monks?

One thing is clear: The sooner Ananda identifies the curious corpse found at his monastery, the sooner he can catch a killer—a killer that is still very much on the loose.