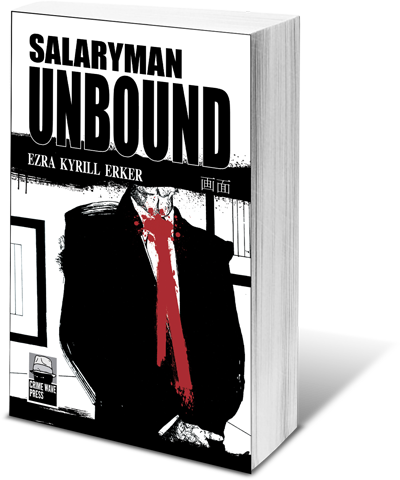 A novel by Ezra Kyrill Erker

Iwasaki Shiro, a 46 year old salaryman in Tokyo is having a midlife crisis. Unexceptional in his IT job, he works in the shadow of his boss’s charisma. His children are embarrassed by his mediocrity and his wife rarely thinks of him as an individual. He has nothing to show for decades of conformity and doing the right thing.

Shiro needs purpose in his life, so he begins to plot the murder of a neglected housewife on his street. He takes trips to scout places to dispose of a body, researches knives and arteries, and buys a neurotoxin while on a business trip in Thailand. His plans transform his personality – he can stand up to his boss, keep his children in line, wear the trousers in the marriage – but as he gets ever closer to doing the deed, it becomes clear there is more going on than he suspected.