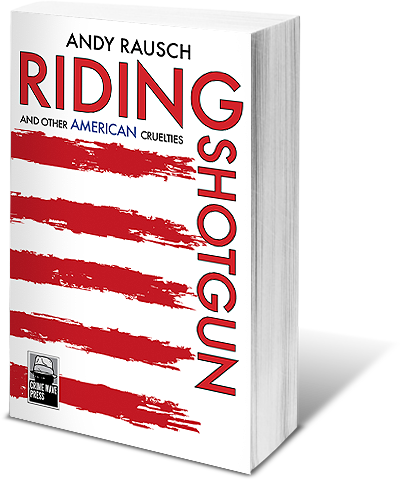 Riding shotgun and other american cruelties

A novel by Andy Rausch

A unique collection of quirky, Tarantinoesque crime novellas. In the first story, "Easy-Peezy," a band of elderly Old West bank robbers return to their wicked ways in the 1930s John Dillinger era. The second story, "Riding Shotgun," is a bitter tale about a man forced to take up arms to protect those he loves. The third tale, "$crilla," is an urban crime fantasy in which a fledgling hip-hop group kidnaps a record mogul in the hopes of making the kind of loot they've dreamed of.

"Andy Rausch has written a tight, taut crime thriller that'll have you on the edge of your seat. I can see my father's [novelist Elmore Leonard] influence in his prose."
-- Peter Leonard, novelist, Voices of the Dead