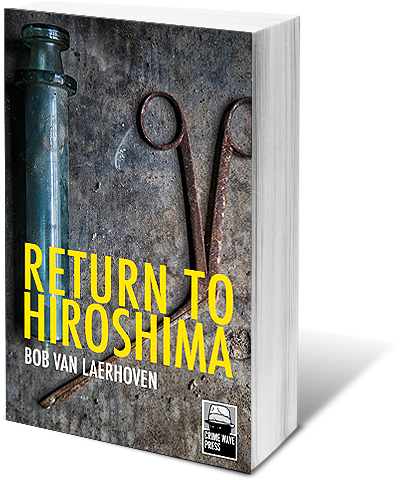 A novel by Bob Van Laerhoven

1995, Japan struggles with a severe economic crisis. In a confrontation with dramatic consequences, fate brings a number of people together in Hiroshima. Xavier Douterloigne, the son of a Belgian diplomat, returns to the city where he spent his youth, to come to terms with the death of his sister.

Inspector Takeda finds a deformed baby lying dead at the foot of the Peace Monument, a reminder of Hiroshima's war history. A Yakuza-lord, rumored to be the incarnation of the Japanese demon Rokurobei, mercilessly defends his criminal empire against his daughter Mitsuko.

And the punk author Reizo, obsessed by the ultra-nationalistic ideals of his literary idol Mishima, recoils at nothing to write the novel that will "overturn Japan's foundations"....

Hiroshima’s indelible war-past simmers in the background of this ultra-noir novel.

Clandestine experiments conducted by Japanese Secret Service Unit 731 during WWII leave a sinister stain on the reputation of the imperial family and Japanese society as a whole.